Finding a printer that ticks all of the above boxes is almost impossible! Printer manufacturers don’t want printers to hang around too long anymore. Gone are the days that you could buy an Epson Stylus Photo R200 / R220 / R300 / R320 printer; plug in a CISS, and use it for the next ten years! 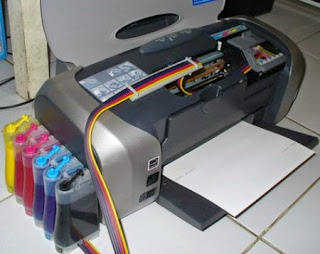 Modern day machines contain more plastic. Many of the heavy metal components have been replaced with, by design, mass produced parts with a very limited lifespan. Computer programs calculate the parameters for fine tuning the longevity of use and the inbuilt obsolescence of the hardware. The death certificate has already been written before the printer is born.

The last fifteen years have seen major changes in ink cartridge technology. Standard use domestic cartridges commonly contained 50ml of ink. Modern day cartridge capacities have been dramatically reduced, in some cases down to just 3ml, increasing the cost per print price. However, this does not take into account the counter balance argument being, the initial purchase price of printers is lower than that of fifteen years ago. Added to the equation, the technology included and the available features provided for under £150 are totally impressive. Printers can now communicate with smartphones and tablets, and it is now possible to print from any internet connected location in the world.

Ten years ago, print head and ink technology gathered a pace. Print resolutions improved, so did how the ink interacted with non-coated paper. Ink began to stand prouder on the surface, not soaking so much into the fibres of the paper. There were also advances in print speeds on some models, however, many remain painfully slow.

Manufacturers have discouraged printer owner from refilling their cartridges. One of the first to do this was Lexmark.  They introduced single-use ink cartridges which would not be accepted by the printer after being refilled.  Epson introduced the 'intellichip', which we were told was to provide the printer with intelligent ink level information. The downside being, once the monitor level read empty, the printer would no longer accept the cartridge.  Later Canon began to use microchips on their ink cartridges, and it was necessary to disable the ink monitor after refilling. Until three years ago Brother were the only manufacturer not to use smart chips on their cartridges. Sadly, this changed with the introduction of the LC123/LC125/LC127 series cartridges. Third party microchip manufacturers were slow to emulate the new Brother chips, and when they did, Brother used WiFi automatic firmware printer updates to change the codes, rendering compatible and refillable cartridges useless until the new version chips became available.

Over recent years Epson has employed firmware updates on many of their printers. They have also introduced new versions of popular cartridges like the T0801–6 series, meaning particular printer models would not work with older chips.